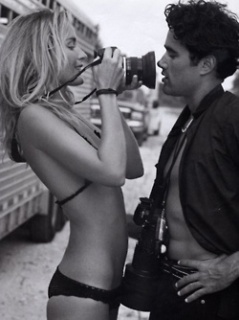 My 9-year old daughter recently asked this from the backseat of my car (isn’t that where all of the amusing/difficult/serious inquiries come from?) after hearing the word in song lyrics.  The question gave me pause.  Not because I didn’t want to answer, but because sexy is undeniably subjective.  I responded eventually in a generic, text-book sort of way (my mother’s voice in my head saying, “answer honestly, giving no more information than they ask for!”), but the question stayed on my mind.

So I set about asking.  One sister responded, “Food is sexy – I am currently eating filet mignon wrapped in bacon with spinach and brie melted on top.  Gant videos.  Edith Piaf.”  Another said, “men with deep voices and strong thighs, confidence, solid ground strokes and a great sense of humor.”  And from sister number three, “confidence, charm, passion for life.  And a well-tailored suit!”

Friends – male and female – also weighed in:  A devilish smile.  A woman in a tank top and a baseball hat. A man with confidence toeing the line of arrogance.  Intelligence.  Great legs in heels.  The well dressed man.  Wit.  Ripped abs.  A woman who can pull off glasses.  Accents.  Bare shoulders in winter.  The dip in her lower back.

What do I think is sexy, you ask?  French press coffee with the New York Times.  Bill Evans.  Working up a sweat.  Red by the fire, white on the beach.  Salted caramel ice cream.  Grey cashmere.  Stolen, knowing glances.  And the sound of a spinnaker catching the wind.