I’m thrilled to introduce a new weekend feature just in time for summer, Cocktail Hour.  Michael, my almost brother-in-law and the most talented mixologist I’ve ever known (this is not hyperbole), has graciously agreed to share his knowledge and his recipes during the month of June here at a & d.  And in true Michael fashion, he’s kicking off Cocktail Hour with a classic.

A few basic principles.  First, using only liquors of the highest quality will result in a good Martini.  This applies for all ingredients.  Just as a chain is only as strong as its weakest link, a high quality Gin with cheap Vermouth will not taste good.  Most people don’t like Martinis because they use bad liquor.

Second, the basic principle of mixing cocktails is to find the blend of ingredients (modifiers) that compliment the Base.  Without the modifier, a base will never be more than chilled liquor – not a cocktail.

According to Embury’s “The Fine Art of Mixing Drinks” (put down the Mr. Bostons….this is the best book on cocktails out there), “most of the present generation learned to drink and most of the present-day bartenders learned their profession during the past 37 years.  The first 14 years of this period were devoted to the famous ‘experiment, noble in purpose,’ and the remaining years have not yet been sufficient to erase wholly the ignoble effects of that era.”

Paying mind to the above principles, the Martini is the most elegant of drinks.  In its purest form, the martini has one base (Gin or Vodka) and one modifier (Vermouth).  It is, in essence, the Hydrogen of the Cocktail Periodic Table.  Many people prefer Vodka to Gin, and I will not judge them.  I will, however, offer the reasons why I prefer Gin.  First, it is the liquor originally intended for the Martini – which was also known as the Martinez.  Second, a good Gin has a depth and viscosity that Vodka does not – Gin really is Vodka infused with juniper and other botanicals.  Last, Vodka is a soul-less liquor (by definition, has no color, smell, or taste) which makes it the ideal liquor for people who like being drunk but don’t like the taste of liquor.

That being said, the proportions of Gin to Vermouth is largely left to the taste of the imbiber.  I do discourage, however, the notion of just “washing the glass” or “adding a few drops” of Vermouth.  This practice negates its role as a modifier and, as stated above, leave one with only a chilled glass of liquor.  People largely don’t like vermouth in their gin because they are adding substandard (read Martini and Rossi) Vermouth.  A good Vermouth will negate all the bad things in straight Gin.  It will reduce the volatility (reduces vapor temp) which eliminates the burn so often associated with a bad Gin and leaves the delightful, smooth flavor of the distillers botanicals behind.

And so:  I give you my favorite recipe for a martini.

2 oz Smooth Ambler Gin.  We stumbled upon the Smooth Ambler at one of the better liquor stores in the area and bought a bottle because it was made in West Virginia.  Who would’ve guessed it was to be the best Gin we’ve ever tasted.  The viscosity and botanicals are perfect.  It is made in small batch pot stills (as opposed to larger column/continuous stills used by large companies) using organic ingredients and it was rated at 94 points by Wine Enthusiast magazine.  If you don’t trust Wine magazines to judge your liquor, the Gin won bronze this past May at the San Fransisco World Spirits competition.  Folks, this is good stuff…..don’t knock it before you’ve tried it.

1 oz Dolin Blanc Vermouth.  This is the Vermouth being poured by most high-end craft cocktail bars in the country and for good reason.  I’d also recommend Lillet as a suitable alternative.

2 drops Bittermens Boston Bittahs.  I didn’t discuss bitters at all before, but the original Martini recipe called for a dash of Orange Bitters.  These amazing ingredients are the spice rack of any serious barstock.  Would one try cooking or baking with no salt, pepper, cumin, cinnamon ect??  Of course not.  Start experimenting with different bitters and they will take your drinking habit to the next level.  The Bittermens here will round out the cocktail and add the slightest hint of citrus to your “just about perfect cocktail”.

A note about mixing.

I prefer mixing all ingredients in a small graduated shot glass.  I then add to the shaker with ice.  Shake vigorously.  And the secret is to double strain by pouring it through a small fine sieve or strainer (see my equipment below).  This frees the cocktail from extraneous ice shards (they will collect like slush in the strainer) and gives the drink that clean mouthfeel. 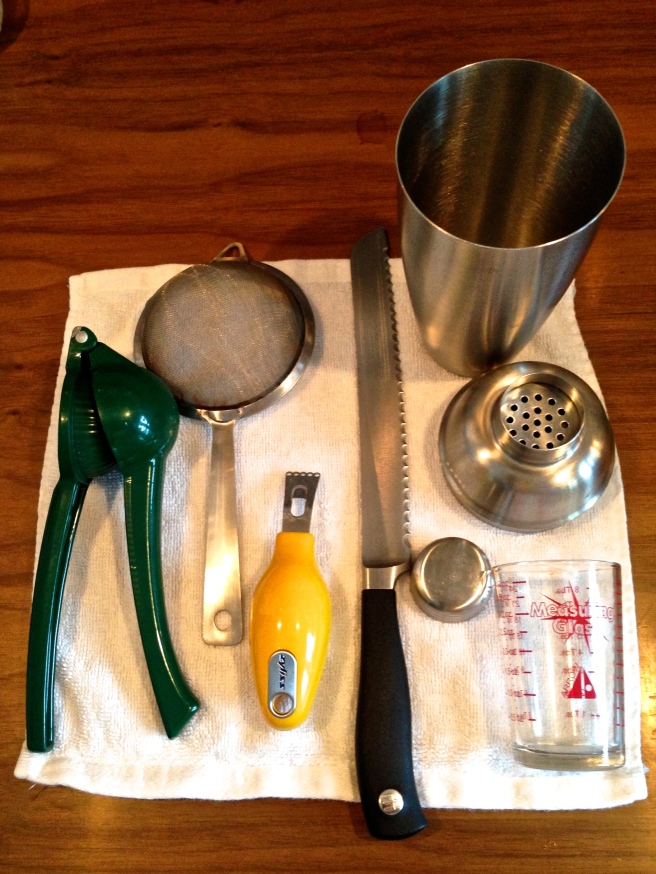 Garnish.  For this summer martini, garnish with a lemon twist.  Be sure to twist your lemon peel to express the oils before wiping the glass rim with it and dropping it in the drink.  Cheers!

Thank you, Michael!  We can’t wait to hear what’s in your cocktail shaker next week.  Now, if I could just talk the two of you into moving in next door…

One thought on “Cocktail Hour: The Martini”